Brian Stutland Aug 02, 2017
The fiscal year for the U.S. Government ends September 30th, 2017. Which is something market participants could care less about if not for, sometime near that date, Congress needs to raise the debt ceiling. Missing that deadline would result in a self-inflicted financial wound that would send shock-waves throughout global markets.  The U.S. Government has been paying off debt since the Andrew Jackson administration without missing a single payment. Raising the debt ceiling is a routine vote. 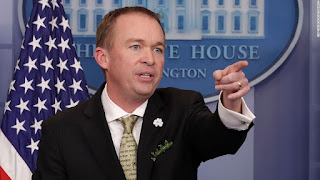 Under normal circumstances, this should be done easily, but many investors are beginning to wonder if we indeed are in normal circumstances. The White House position is not entirely clear. White House Press Secretary Sarah Huckabee Sanders stated the White House position is the same as Treasury Secretary Steve Mnuchin’s, who is asking for a ‘clean raise’. However, the Director of the Office of Management and Budget is, you guessed it, Mick Mulvaney, who has stated the Government should not pass a clean bill without a health care bill first.

This chaos has caused for major concern for two Senators; Susan Collins of Maine and Jack Reed of Rhode Island. The two were caught in a ‘hot mic’ wondering out loud how on Earth, with all the chaos in Washington right now, they are going to be able to pass a budget or raise the debt ceiling.

So far, the market has not even blinked at this potential danger. Decent earnings have pushed the Dow Jones above 22,000. However, it should be pointed out that the market reached an all-time high without the VIX on a relative low, which I consider a contrary indicator.  In recent weeks in the VIX pit, we have seen increased bets on a rising VIX, primarily in September and October dated options.

The VIX is currently under 10.50 and the country is driving down the highway on cruise control, oblivious to any potential danger, without anyone behind the wheel. With the summer drawing to an end, and so much at stake with so few people caring, wake me up when September ends. -Green Day, American Idiot, 2004.