Brian Stutland Jul 26, 2017
“I would like to bet ten tens on the tenth horse in the tenth race, please.” 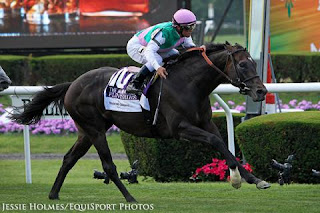 Last summer, on a warm cloudy day June 11, 2016 in Elmont New York, a good friend of mine (Rob) confidently walked up to the cashier at Belmont and spoke those famous words.  Ten Tens on Ten in the Tenth Race.  In fact, it had been decided it months earlier. We had been discussing hosting his bachelor party in New York, go to the Belmont Stakes, and watch a Yankees vs Tigers game and Rob convinced the group to go to New York by proudly proclaimed his prophecy.  I had almost forgotten about this bold prediction when I witnessed him at the register, but when I looked up, and saw Flintshire, the 10th horse in the race upcoming race was the favorite.  “What could possibly go wrong?”  I thought to myself (an options trader who bought a racing program attempting to handicap and gain an ‘edge’ in the previous nine races unsuccessfully).  I went to a pretzel vendor and changed 5 twenties into ten tens, walked quickly to the cashier and I smiled as I told the her ten tens on the tenth horse in the tenth race to win.  I wasn’t the only other person in my group of Michigan natives, to be feeling Flintshire that day.  Josh bet 10 dollars, his largest bet of the day.
We weren’t the only people at Belmont that day who had faith in Flintshire.  By the time of the post he went off as an overwhelming favorite.
This herd mentality, is not unlike what we are seeing currently in the VIX.  With a weekly settlement  of 9.1, a close below 10 today will be ten days under ten in a row for the VIX.   This is rare territory.  The VIX has closed below 10 in only 25 days in its history.  And even more unusual, 17 of which have happened in the last month.  Ten under ten is so unusual I decided to look under the hood at VIX exchange traded products (ETPs), VXX UVXY XIV and SVXY.
There is no concrete reason why the spot VIX calculation has changed how its behaved recently, but one reason could be the VIX futures themselves.  Specifically, the increasingly crowded trade that will profit on VIX futures going lower.  I was shocked to learn today when I looked up the short interest in the 4 largest traded VIX products, VXX UVXY, XIV and SVXY, is over 2 Billion dollars.  Yes two Billion dollars, with a capital B is short VIX futures.
On the surface this looks like a bubble, and bubbles characteristically make money before they pop.  Currently the VIX is at 9.2 and the August future is 11.15, there is edge in that trade, but only if the VIX remains at historically low levels.  On top of that, very serious danger lurks, if Volatility were to suddenly rise, what will happen if shorts try to exit at the same time?
Specifically, what will happen to VIX futures when 2 Billion dollars of short futures try to get out of the market.  2 Billion dollars is over 150,000 VIX futures contracts, and over the past 30 days the average volume for futures in one day is only 110,000.
A short squeeze could be disastrous for this trade, and the short VIX futures trade is likely to get more crowded before it bursts.
As for the us at the Belmont?   With our foolish alliterative bet?  It got even more crowded before the race went off.  The odds for us got even worse on  Flintshire and when we won we took home 56 dollars for our 100 dollar bet.  As an option trader I have to admit, that was a very bad risk reward.  And the longer the VIX futures trade low, and the more short interest that builds, the riskier it will become to trade short VIX futures.